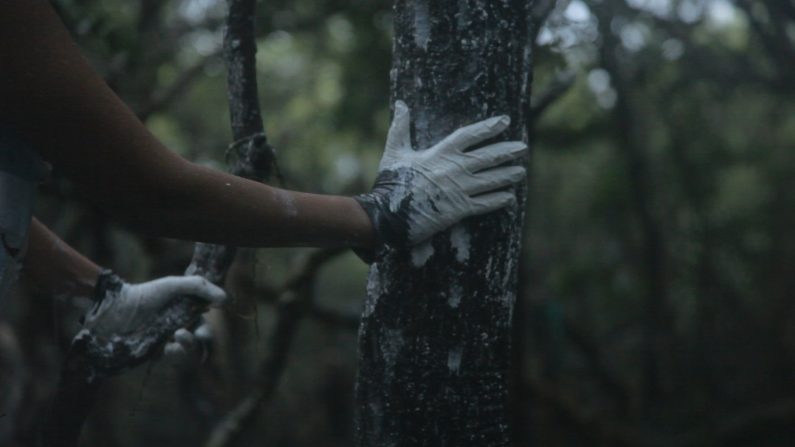 Anna-Sophie Springer is going to talk about artistic perspectives on ecology and natural history, which ties in with Tejal Shah’s current exhibition UNBECOMING. Springer is going to present her research on nature, science and art. In particular, she is going to discuss her concept for the exhibition Verschwindende Vermächtnisse: Die Welt als Wald, which has recently opened at Zoologisches Museum Hamburg. Through the lens of contemporary art, this exhibition, which Springer developed in cooperation with Etienne Turpin, takes a close look at the destruction of tropical habitats in the Anthropocene. The curatorial concept is based on a direct connection between the artistic positions and the permanent natural history display of the museum. Springer and Turpin are committed to rethinking traditional divisions of knowledge production, promoting multidisciplinary and multi-stable images of “nature,” and developing postcolonial vocabularies and literacies as part of a cultural turn toward species extinction and anthropogenic climate change.

Anna-Sophie Springer is an independent exhibition maker, writer, editor, and publisher. After working in editorial positions at Merve Verlag and transmediale, since 2011, she directs the publishing platform K. Verlag in Berlin. In this project, as in her practice at large, she merges curatorial, editorial, and artistic commitments by stimulating fluid relations among images, artifacts, and texts in order to produce new geographical, physical, and cognitive proximities—often in relation to historical archives and the book-as-exhibition.

Anna-Sophie Springer completed her M.A. in Contemporary Art Theory from Goldsmiths College, University of London (2007), and in Curatorial Studies from the HGB, Leipzig (2013). Since 2016, she is a Visiting Lecturer at the Institut Kunst, Basel. Currently, she is conducting research for her Ph.D. on the financialization of nature at the Centre for Research Architecture, Goldsmiths. As a practice-based degree the project also continues her interest in natural history exhibitions in times of ecological collapse.