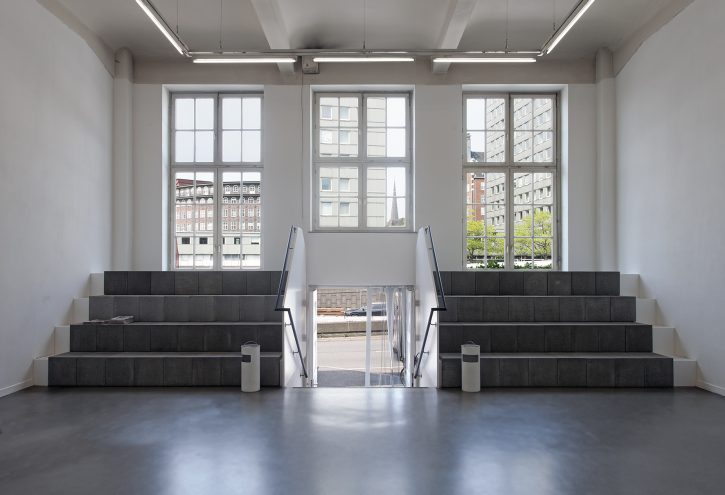 The Kunsthaus Hamburg is a centre for contemporary art, centrally located between the Deichtorhallen and Hamburg’s main railway station (Hauptbahnhof). On 500 square meters, the former market hall hosts five to eight varying solo and group exhibitions annually, presenting works from contemporary visual arts and related disciplines. The main emphasis of the programme lies on supporting the up-and-coming generation of artists; moreover, historical work and topics with particular relationships to Hamburg are part of the programme. Beyond its role as an exhibition venue, the Kunsthaus sees itself as a space of communication, as a forum for the discussion of issues relevant to today’s society. Over the last years, its initial focus on the Hamburg art scene has been expanded to include an international exchange, and international contemporary art is to feature even more prominently in the future.

The Kunsthaus Hamburg was founded in 1962 by the Free Hanseatic City of Hamburg and was initially located in a building at the Ferdinandstor, where the Gallery of Contemporary Art – Die Galerie der Gegenwart of the Hamburger Kunsthalle – was then built in 1992. Since 1993, the Kunsthaus has had its home in the old market hall at the Klosterwall. In January 2002, it took on the legal status of a nonprofit limited liability company. From its very beginning, the Kunsthaus has been an important home for the Hamburg art scene as Hamburg’s Professional Association of Visual Artists (Berufsverband Bildender Künstlerinnen und Künstler Hamburg) has its office there and presents an exhibition by its members once a year. Furthermore, also Ateliers für die Kunst (AfdK), an association which helps artists find studios, is based at the Kunsthaus.

Being a regular guest, the applicants for the Hamburg Visual Arts Scholarship give an insight into Hamburg’s rising art scene. In the past, a focus on Asia generated interests from far beyond the city; Ai Wei Wei and Wu Shanzuan (2006) were among the artists showcased. Exhibitions with a contemporary-historical or historical context attracted international attention, among them Aby Warburg – Mnemosyne-Atlas (1994), Twen – Revision einer Legende (1996), Wols. Aquarelle, Zeichnungen und Notizblätter (2001) and the exhibition Nachtmahre und Ruinenengel. Hamburger Kunst 1920 bis 1950 (2013), which presented art from Hamburg ostracized by the Nazis, freedom roads!, which looked into Germany’s urban colonial history, or …und eine welt noch (2016), which focused on Hanne Darboven’s influence on contemporary art.