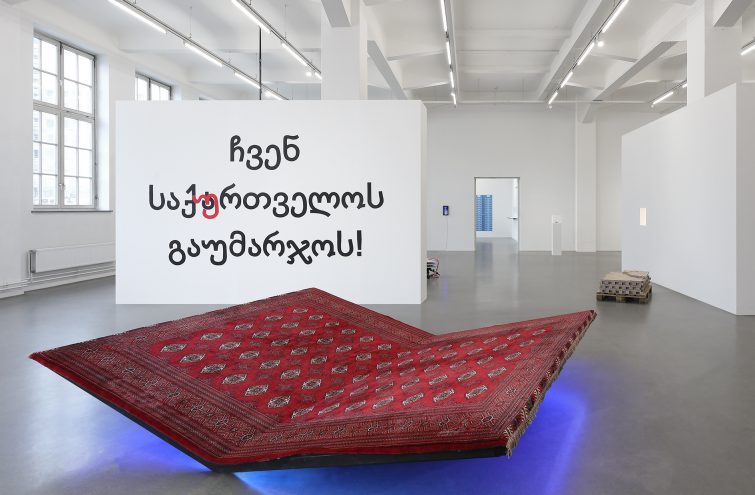 The art collective Slavs and Tatars addresses the interweaving of contemporary anthropology and transnational politics in its extensive installations, consisting of prints, text material, sculpture, audio and video works. A central and connecting element for them is language in the context of religion, power and identity building.

Red-Black Thread explores the construction of black identity not from the traditional perspective of the Anglophone and Francophone worlds of the Atlantic but rather by shifting it to the Russophone idiom of imperial Russia and the Soviet Union. Commissioned by the Walker and Metropolitan Museums on the occasion of the Siah Armajani retrospective “Follow This Line”, Red-Black Thread looks at the experience of labor, race, and sexuality from a shared Russian / Soviet and African-American perspective to better understand failed promises of conviviality and co-existence.

Slavs and Tatars was founded in 2006 by Kasia Korczak (Poland) and Panyam Sharifi (Texas/Iran). They describe themselves as a “faction of polemics and intimacies devoted to an area east of the former Berlin Wall and west of the Great Wall of China known as Eurasia”. The two artists also publish books and give lecture performances. Their works are represented in important international museums and at biennials, among others: Tate Modern (London), the Centre Pompidou (Paris), the Museum of Modern Art, Warsaw. Their works have also been the subject of solo exhibitions at the 58th Venice Biennale (2019); Salt, Istanbul (2017); Institute for Modern Art, Brisbane (2015); Kunsthalle Zurich (2014); Dallas Museum of Art (2014), MoMA, New York (2012); and Secession, Vienna (2012). Slavs and Tatars have published several books: Kidnapping Mountains (Buchwerke, 2009), Not Moscow Not Mecca (Revolver / Secession, 2012), Khhhhhhh (Mousse / Moravia Gallery, 2012), Friendship of Nations: Polish Shi’ite Showbiz (2nd Edition, Bookworks, 2017), as well as a translation of the famous Azerbaijani satire Molla Nasreddin (IB Tauris).