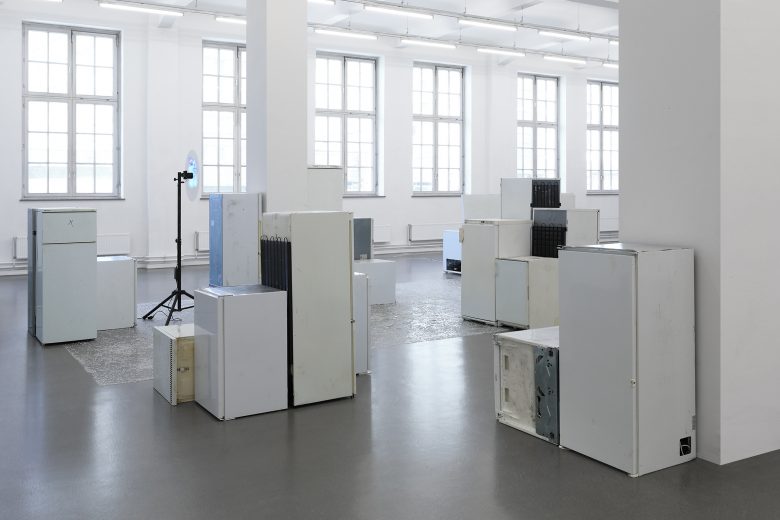 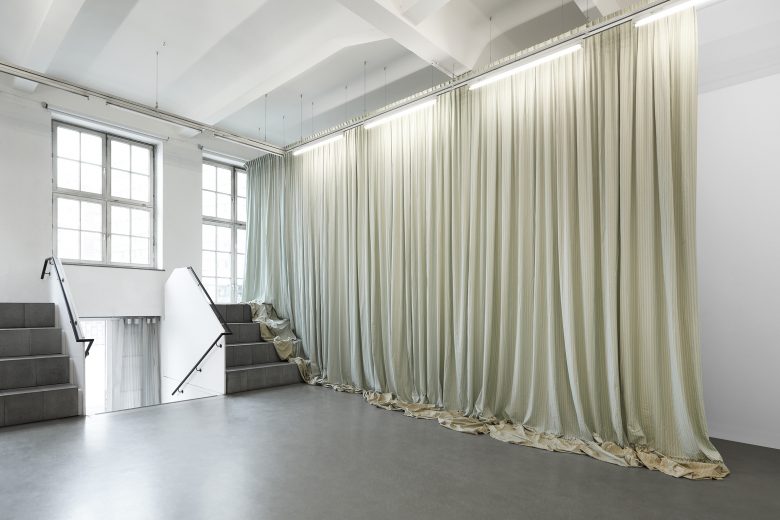 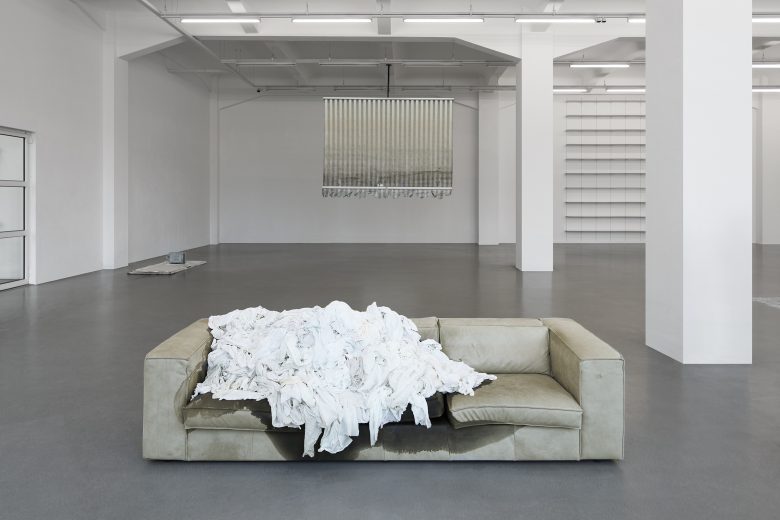 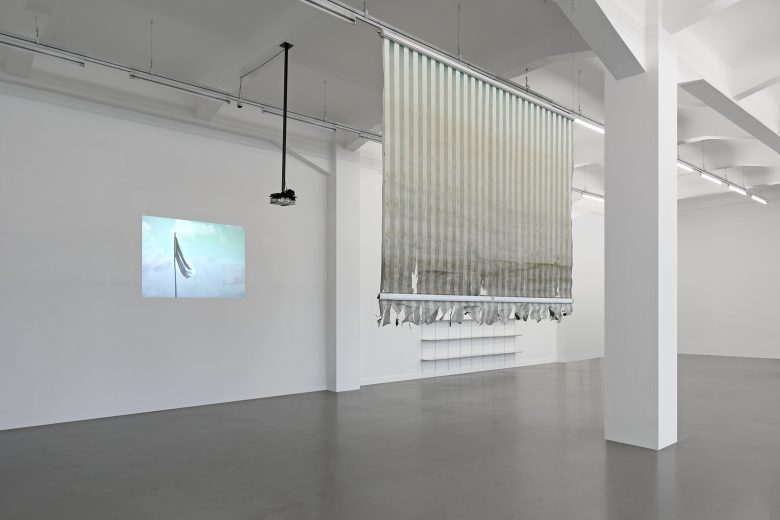 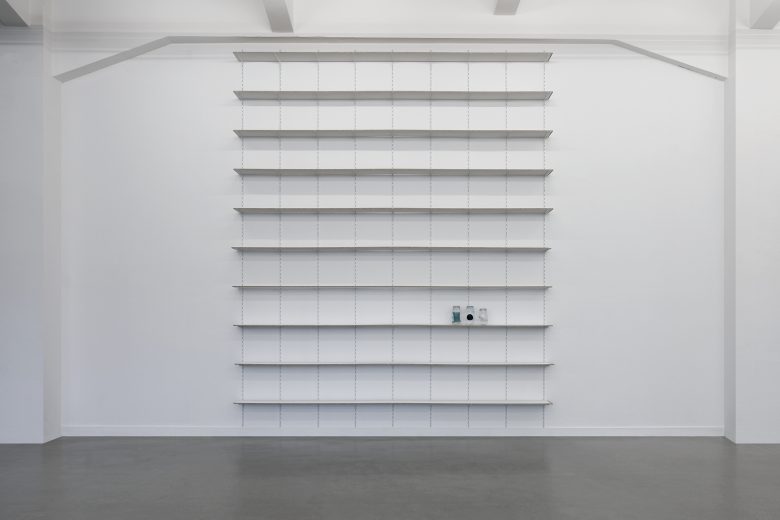 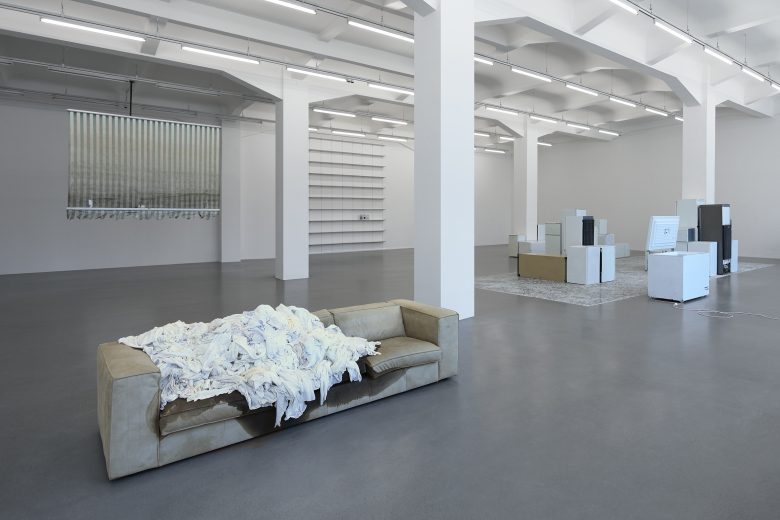 Edith Dekyndt
The White, The Black, The Blue
Kunstpreis Finkenwerder 2019

On the occasion of Edith Dekyndt’s reception of the Finkenwerder Art Prize 2019, the Kunsthaus Hamburg will present a comprehensive solo exhibition of her works in collaboration with the Hamburger Kunsthalle.

For her exhibition at the Kunsthaus Hamburg, Edith Dekyndt is developing a series of new works that will relate to the city in various ways. With its port, and as a global transshipment hub, Hamburg is part of an economic trading system that generates a clearly visible local prosperity, which, however, is also characterized by extreme disparities. Thus, not far from Hamburg’s city center, the waste of the so-called industrial nations is amassed in containers as raw material to be distributed to the most precarious participants of the global cycle. In the exhibition space of the Kunsthaus, Dekyndt will arrange discarded objects from Hamburg households and industrial production into an expansive installation in which the harshness of the economic cycle is reflected on multiple sensory levels. Through minimal interventions, the artist will transform the incorporated materials by soaking these with liquids, through accumulation, conservation, and with other methods. Combining time-based media works with sculptural, material assemblages, Dekyndt is addressing her complex subject matter in the exhibition with a timeless formal language.

Contrasting material characteristics and aggregate states of objects, images, and sounds, often drawn from everyday life, are consistent features of the artist’s survey exhibition. Dekyndt links the various elements with one another through subtle interventions in a complex synesthetic field of references. She often uses ephemeral materials such as fabrics, earth, liquids, or salts in her works, making the silent energies of natural transformation processes visible or documenting the formative dynamics that she discovers in her environment in short video sequences.

In the exhibition title The White, The Black, The Blue, the artist is alluding to the manifold symbolic power of colors, the meaning of which greatly varies depending upon the given context and connotation. In her works, Edith Dekyndt always places human perceptual abilities in a social and political framework in which the supposed neutrality of natural phenomena strongly contrast with how and for which purpose man takes possession of these.

The 20,000 euro Finkenwerder Art Prize, funded by the company Airbus, has been issued since 1999 by the Kulturkreis Finkenwerder. It is awarded to artists who have made an outstanding contribution to contemporary art in Germany with their work. In the past years, the artists Almut Heise, George Rickey, Candida Höfer, Neo Rauch, Daniel Richter, Thorsten Brinkmann, Ulla von Brandenburg, Christian Jankowski and Georges Adéagbo were recipients of the award. With the Berlin-based Edith Dekyndt, the jury honors an artist who with her subtle and minimalistic visual language has created a lasting awareness of the interrelationships between humans, matter and environment.