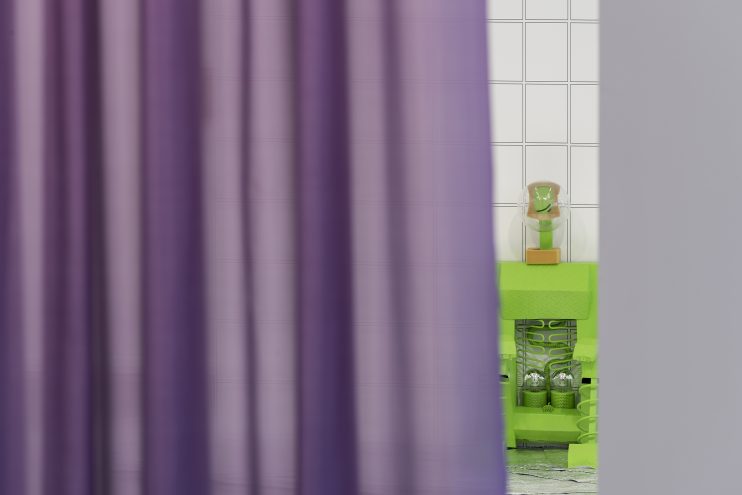 Flaka Haliti, Installationsansicht, Here – Or Rather There, Is Over There, Kunsthaus Hamburg 2018, Courtesy the artist, Deborah Schamoni, Munich and LambdaLambdaLambda, Pristina, Photo: Michael Pfisterer

Flaka Haliti works with everyday objects and aesthetics such as Ikea bags, children’s drawings, in-store displays, junk and barriers. Her works initially seem cheerful, yet they frequently point to questions of systemic violence and dubious authority of interpretation, to limitations as well as the overcoming of them. Haliti reflects on an existence in the midst of constructed social inclusions and exclusions. Large sculptures based on UN security barriers refer to territorial, political borders, while a seven-metre-long curtain—strictly speaking also a form of barrier—symbolises the endless expanse of the sky. Furthermore, she reflects on the pressure of neo-liberal living and working conditions, constant self-renewal, (re-)presentation and productivity in several works by means of the fictional character Joe.In the context of the exhibition Here – Or Rather There, Is Over There, Flaka Haliti and Adam Szymczyk, curator and artistic director of documenta 14, will speak about the context of her work.

Video documentation of the talk in our media library

Flaka Haliti (*1982 in Pristina, lives and works in Munich) studied graphic design at the Universiteti i Prishtinës, Pristina (2002-2006) followed by fine art at the Städelschule, Frankfurt am Main. She is currently studying for her PhD in Practice at the University of Applied Arts Vienna. She presented her first institutional solo exhibition in Germany in Kunsthalle Lingen in 2017. Her works have been shown internationally in solo exhibitions in the pavilion of the Republic of Kosovo at the 56th Venice Biennale (2015), mumok Museum moderner Kunst Stiftung Ludwig, Vienna (2014) and in the Kosovo National Museum, Pristina (2014), among others.

Adam Szymczyk (*1970 in Piotrków Trybunalski, Poland) is Artistic Director of documenta 14. He was a co-founder of the Foksal Gallery Foundation in Warsaw, at which he worked as Curator from 1997 till 2003, when he assumed his new post as Director at Kunsthalle Basel, Switzerland, which he had until 2014. In 2008 he co-curated with Elena Filipovic the 5th Berlin Biennial for Contemporary Art under the title When Things Cast No Shadow and in 2012 he curated Olinka, or Where Movement Is Created at Museo Tamayo in Mexico City. He is a Member of the Board of the Museum of Modern Art in Warsaw. In 2011, he was recipient of the Walter Hopps Award for Curatorial Achievement at the Menil Foundation in Houston.