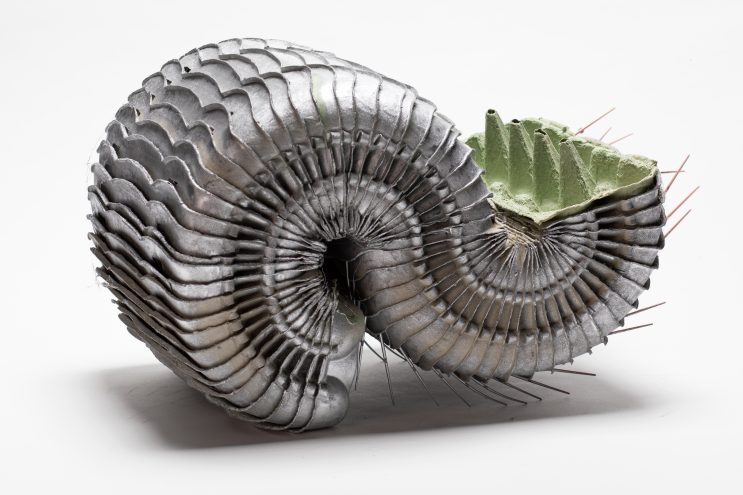 The Hamburg-based artist Carlos León Zambrano (*1986 Caracas, Venezuela) questions real and fictional narrative structures and addresses strategies of social survival with a sense of irony and alert sobriety. His conceptual installations generally consist of minimal interventions into the space, yet often exert a powerful impact through a specific gesture or magical moment. Most of his work is inspired by the informal language, its ciphers and codes from his home country Venezuela.

In his first institutional solo-exhibition, Zambrano has developed a process-based, ephemeral installation for the Kunsthaus Hamburg. Suspended from the ceiling and distributed on the floor, he stages objects recalling rare natural history objects, scientific instruments and ethnological finds from remote worlds. Organic, amorphous and natural forms inhabit the entire exhibition hall, which, now incorporated into the scenario, has been converted into a kind of field for experimentation. Technical devices supplement the peculiar conglomeration of diverse species, moving in time and space on a thin evolutionary line between imitation, camouflage and mutation.

Like pieces of evidence from past epochs, the stylized, sometimes overstatedly exotic sculptures seem caught in a strange mysteriousness. In Zambrano’s installation, vocabulary drawn from a contemporary, artificially produced consumer goods fetishism is ironically interspersed with natural science exhibits. The mass product from our globalized everyday life is deciphered and reassembled to form paradoxical symbioses. Based on this shift in context Zambrano challenges our consumer and entertainment culture – and thereby our western system of values. At the same time, he delivers a subtle critique of the colonial perspective and, through playful variants of transformation, illustrates that history is constructed from reality but also from cliché and fiction.

The temporal factor becomes relative – with references to past life and to technical special effects of the present. Evolutionary history and today’s fast-pace life are thus placed in juxtaposition. Against the backdrop of the extinction of biodiversity, the artist reminds us that human behaviour has been all but a heroic journey. Evidently, homo sapiens has turned into the biggest predator today – and thus the determining evolutionary factor that places the existence of all living beings and especially his own at stake.

Carlos León Zambrano (b. 1989, Caracas, Venezuela) lives and works in Hamburg. He graduated from the MFA programme at the Academy of Fine Arts Hamburg and has already received several scholarships, et. al. Hamburg grant for Contemporary Art of the Ministry of Culture and Media in 2019. In 2017 he was nominated for the Hiscox Kunstpreis.

* The privacy policy for Zoom, whose provider is based in the USA, can be found here: zoom.us/docs/en/privacy-and-legal.html