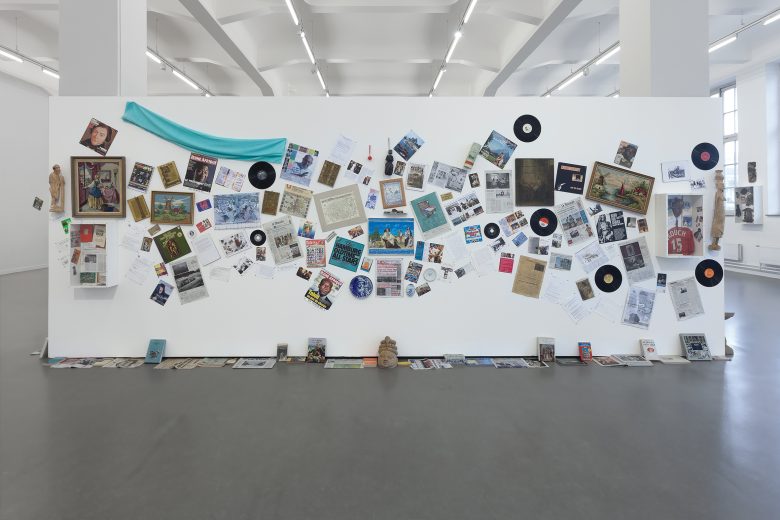 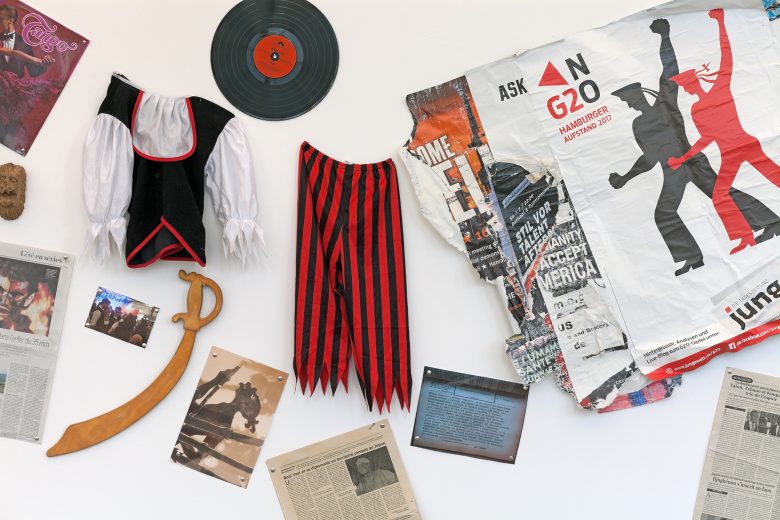 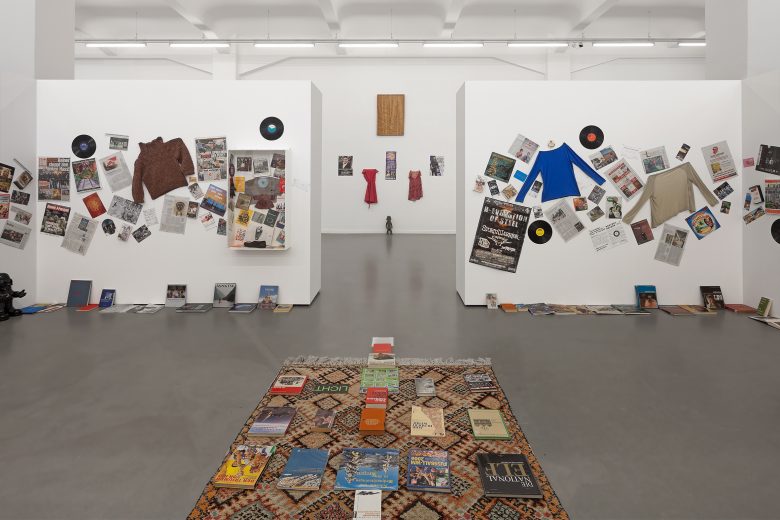 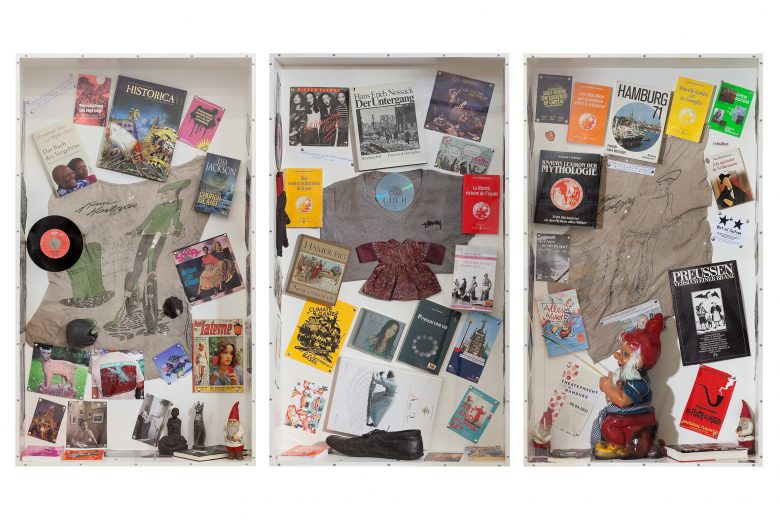 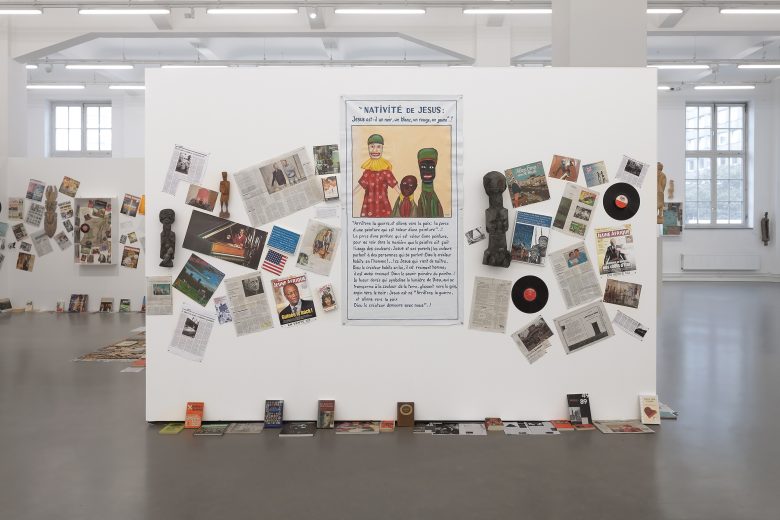 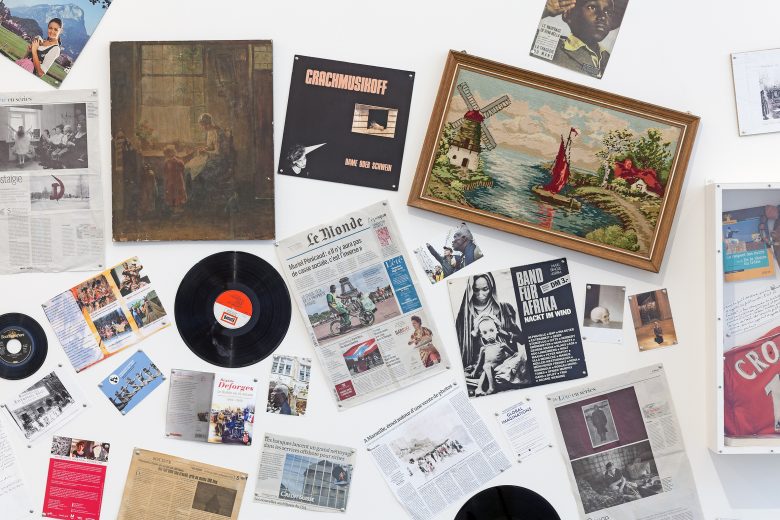 On the occasion of the award of this year’s Finkenwerder Art Prize to Georges Adéagbo, the Kunsthaus Hamburg is presenting the artist’s first large-scale solo exhibition in his adopted home city of Hamburg.

Georges Adéagbo’s extensive assemblages that are usually installed in situ can be described as associative cultural-historical puzzles. The individual fragments comprising his frequently large-scale material collages are composed of text documents, photos, books, paintings, and objects, which Adéagbo collects on his travels, at flea markets, in everyday life, in second-hand bookshops, and elsewhere. Later, he sorts these thematically and assembles them into both discursive and subjective narratives. With his installations, he often portrays, among others, musicians, politicians and renowned European philosophers, in other cases taking abstract concepts such as otherness, globalization, and colonialization as starting points for his oeuvre. Adéagbo’s method of working can be comprehended as a process which is never complete, with the assemblages of individual elements in his installations taking a fixed shape only temporarily.

Before the backdrop of the personal biography of the artist, who was born in Benin (West Africa), the Kunsthaus Hamburg will primarily feature two large groups of works, which will enter into new dialogs with one another and will be expanded by site-specific objets trouvés and contemporary documents. In L’Allemagne avant la Guerre et l’Allemagne après la Guerre (Germany before the War and Germany after the War), Georges Adéagbo explores the cultural history of Germany and examples of identity-establishing symbolism. In his extensive assemblage, he interweaves local cultural clichés, artefacts, and documents with those of West Africa. In the group of works comprising Globale Imagination: La Défense…! (Global Imagination: The Defense…!), he approaches Europe’s post-colonial history in relation to Africa. Apart from the question of cultural identity, the exhibition held at the Kunsthaus will also focus upon Adéagbo’s self-conception as an artist. With the exhibition title À la rencontre de l’art (“Art as a sphere of encounter”), he points to the fact that the concept of art – determined particularly by the west – is only one of many possible definitions to describe his daily practice of reflecting upon, collecting, and arranging “cultural” found objects. Adéagbo likes to describe himself as an archeologist but he chooses art as his means of communication because it is capable of levelling criticism subtly without provoking a direct confrontation. (“Qu’est-ce qu’est l’art? Une manière de parler avec son prochain, sans devenir son ennemi.”).

In Adéagbo’s works, academic discourses and everyday culture encounter one another, maintaining an equal balance. Through his method of assembling and arranging his various references and artefacts, commenting these with texts of his own, the artist lets narratives take shape that counter a one-sided interpretation of history. In doing so, he has not only made an essential contribution to the examination of Europe’s post-colonial heritage in the past 25 years; he has also challenged the perception of “African” art in the western art context. In reversing the role of the colonial “discoverer,” Adéagbo deconstructs the mutual clichés and projections of that which is respectively seen as “the other.”

Georges Adéagbo (*1942) did not undertake any classical training as an artist and was perceived by the international art world at a fairly late point. Without regarding himself as an artist, he developed his daily practice of reflection through found objects, images, and texts entirely independently in Cotonou. Since the mid 1990s, Georges Adéagbo has regularly participated in major exhibitions, and, as the first African artist, was recipient of an award bestowed at the 48th Biennale di Venezia in 1999. In 2002, he presented a site-specific spatial installation at Documenta 11, and had solo exhibitions, among other venues, at the Museum Ludwig, Cologne (2004), the MAK, Vienna (2009), the MUSAC, Leon (2011), the Moderna Museet in Stockholm (2014), the Israel Museum, Jerusalem, and participated in the Shanghai Biennale (2016). He is thus one of the most prominent West-African artists with an international reputation. In Hamburg, he last presented the installation Inverted Space in 2015 in collaboration with the project “Stadtkuratorin” in the public sphere.

The 20,000 euro Finkenwerder Art Prize, funded by the company Airbus Operations, has been issued since 1999 by the Kulturkreis Finkenwerder. It is awarded to artists who have made an outstanding contribution to contemporary art in Germany with their work. In the past years, the artists Almut Heise, George Rickey, Candida Höfer, Neo Rauch, Daniel Richter, Thorsten Brinkmann, Ulla von Brandenburg, and Christian Jankowski were recipients of the award. With Georges Adéagbo, who resides in Cotonou (Benin) and in Hamburg, the jury of five experts appointed by the advisory board of the Finkenwerder Art Prize is honoring an artist who is uniquely capable of surmounting the differences between divergent cultures and who succeeds in making palpable the complexity of cultural identity in his art.